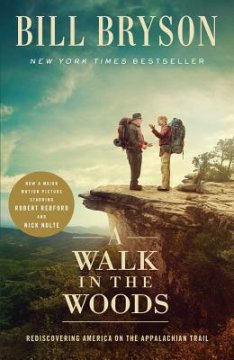 Bill Bryson, an American who has returned to his homeland after two decades abroad in Britain, has decided on an adventure of a lifetime: hiking the Appalachian Trail. Not for the brave of heart, the Appalachian Trail (AT for short) is full of hazards that Bryson has decided he’s rather not endure alone. To increase his change of survival in the wild, he’s decided to brave the trail with a friend. After attempting to recruit many friends, his travel companion turns out to be his last pick, Katz, a long-lost friend from college, who doesn’t take long to get on his nerves. Katz accompanies Bryson on the trail, and Bryson remembers quickly why he and Katz aren’t closer companions.

Bryson packs A Walk in the Woods with lots of historical facts about the Appalachian Trail and why it’s a special part of America. At times, the book deviates from an entertaining story into historical teaching, and it never picked up the promise of humor that one critic referred to as “Choke-on-your-coffee funny”. Perhaps this was a reference to later chapters that I never arrived at: there are few books that I haven’t been able to finish, but this is one. A Walk in the Woods didn’t sustain my attention. I was so bored by it, that I only progressed through a third of the book.

I would recommend A Walk in the Woods to readers who have read the first chapter of the book in its entirety and have completely fallen in love with it. That feeling, I think, is what you’ll need to enjoy this book. Anything less will probably have you disappointed, as the story doesn’t gain the momentum needed to make it more interesting as the pages are turned.

FTC Disclosure: I received this book for free from Blogging for Books in exchange for my honest review.