Depending upon the denominational circles in which she finds herself, a Christian woman might be the exception if she isn’t married by 25, making it difficult to find peers who can relate to her life as a Christian single in a world where sex before marriage and cohabitation are the norm.

There are plenty of books that tell Christian singles what not to do (don’t fornicate, wait on the Lord for a Godly spouse) and lots of books tell Christian teens how to Biblically date or court. But many of these books are geared toward the younger crowd who aren’t yet in the “career” age yet.

It was with this reality that I was really excited about Tony Evans’ new book Kingdom Single.  One of the bullet points on the back cover says that God has a mission for you to join now, as a single. You don’t have to wait until you’re married to have a rewarding life. Even if you never get married, you can still live fulfilled and satisfied as a whole person, with a happy life. This is a very different approach from any other Christian book on singleness that I’ve read, so I was really excited about it.

But it wasn’t long into Kingdom Single that the book fell flat. While it has some positive ideas, the way they’re explained falls short. One in the beginning is that you shouldn’t just wait idly in your life wondering where your mate is, but you should be busy with your mission in life. This is a powerful idea that I agree with, but the example used to illustrate it is so bizarre that it wasn’t of much help. Tony uses the Biblical example of Adam and Eve’s creation in Genesis 2. We see very clearly that God looked at Adam and said that it wasn’t good for man to be alone and from that, God decided to make a helper suitable for him. (Genesis 2:18). This is also why Eve was created – because of Adam’s lack of a suitable helper. Tony says that Adam wasn’t looking around wondering where his woman was, and that when Eve was created, she wasn’t looking for her man. And that’s correct- but Adam was only on Earth for seven days (literal or metaphorical, we could debate), and Eve was created for the sole purpose of being a helper to her husband, before sin and corruption entered the world, so she didn’t have to endure a long process of having to wonder where her husband was, if he existed, how to find him, and so on. For the single Christians wondering where their suitable partners are, this example is not the best one to look at and say that Christian singles should just be busy about their business not wondering where their suitable partners are. If anything, Genesis 2 validates a Christian single’s desire to feel loved and supported by a marriage partner. Better examples for both sexes on how to live out a calling and what to search for in a partner could be found in Proverbs 31; this passage has incredible mileage for both sexes as it gives women something to aspire to and men something to pursue. (And a Proverbs 31 woman can make some assumptions that for the virtues she’s pursuing, her man can meet her standards of Godliness as well.)

Another part of Kingdom Single that made this such a difficult book to read – and why I didn’t finish it – was the lack of practical suggestions or examples from people living today. The examples were all from the Bible, and while I appreciate Biblical examples, living examples are good too. While the premise of Kingdom Single was promising, it didn’t read as a book written for single people on how to live out their singleness in a Godly way. It just seemed to be a book on how to life a Godly life with the word “single” or “kingdom single” slapped on in various places. The content didn’t match well to what the book was supposed to be about.

FTC Disclosure: I received a free copy of Kingdom Single from the publisher in exchange for my honest review.

Most people probably think of Jesus’ interactions with people in the big ways, but what about the small ways? Is it possible that Jesus made just as big of an impact on people’s lives in the small exchanges as he did in the big, long sermons?

Carl Medearis thinks so. In his new book, 42 Seconds The Jesus Model For Everyday Interactions, he claims that the average length of a conversation Jesus had with a person was a mere 42 seconds. Not even a whole minute. Not much time at all. Within these fleeting seconds, Medearis proposes, there are some ways an impact can be made on a person’s life, with each chapter posing a question. I like how Medearis uses questions to structure each chapter, and he gives stories from his own life and other people’s lives. The stories are easy to relate to, and even though the author makes suggestions on how to follow the “42 Seconds” conversation model of making a difference, he’s honest on how he falls short on his own suggestions. The book is easy to read, the chapters are short. Each chapter begins with a “Nonstarter” – something that Christians might be tempted to do  (i.e. “Try to impress “), countered by an “Opener” –  the alternative (i.e. “Be vulnerable”). The good thing about the suggestions given is that they aren’t radical life changes you have to make in one day, but they’re all small steps you can take at your own comfort level, wherever you are.

Why, you may ask, is this necessary, when American Christians are free to worship as we please, where we please, how we please? Nyquist explains that persecution is not just physical harm or death, but it comes in many other forms. With this understanding, persecution is coming for many American Christians. He urges those in America to decide how they will respond to this when it happens. He lays out some responses to persecution and explains how large cultural changes in America have happened.

Overall, Prepare is a well-written, thought-out book. For those paying attention to the issues of religious liberty in society at large, a lot of what the author is saying will make a lot of sense.

Do you want to love your work, or at least enjoy it a little more?

So much of our waking lives is spent at work, but for many people, work is downright drudgery. Still others wish that they could move into a field that would align better with their interests and skills. The idea of work that they could love is just that… an idea.

CEO Robert Dickie wants you to love your work and has some ideas on how you can pivot into a career change. His new book Love Your Work recognizes:

“the Great Recession “refugees” who worked hard, followed instructions, and did everything they were told to do…only to wake up one morning… Instead of being passionate about what you were doing, maybe you found yourself just getting by. You noticed the world changing around you…” (page 5)

To be clear, there is no microwave method for career change success. This book is best meant for those who have some time to calculate their next move, rather than those who are jobless with no time to consider what they want to do next. Dickie acknowledges this, advising that those who need a job fast will need to create a short-term plan first rather than a long-term one.

But for those looking at the long haul, Love Your Work has a lot of ideas. Dickie gives suggestions on how to acquire additional skills or certifications without racking up an enormous amount of debt. He also wants you to be aware of the changes surrounding technology and believes that these are going to be very influential in the work world; even if you don’t work in technology, he believes changes in the tech world are changes you need to be aware of and he gives links to news sources for the industry.

Love Your Work is unique in that it shows a Christian angle in some ways. For example, Dickie uses examples of Bible characters to show the importance of integrity, and he explains how the fruits of the Spirit relate to having emotional intelligence. 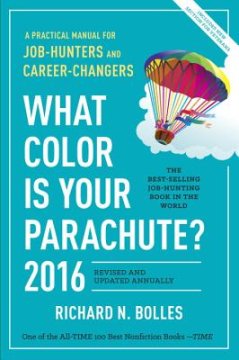 How to Overcome Hardships in Your Job Search

What Color is Your Parachute by Richard Bolles is updated every year. Job-seekers and career changers consult this book for answers on how to steer their career in a better direction. Here’s what you may find in this year’s revised edition of the book.

Lots of reflection: Bolles encourages the reader to look inward, to reflect, to ponder on what you already know, what you like, and how you prefer to work. I’m a reflective person, so if you are too, you may have already answered some of these questions.

Thoughts on job-searching with a disability: Bolles says that “everyone has a handicap”. He seems to view a handicap as something that makes one job-seeker different from the other; he doesn’t seem to truly acknowledge that some jobs do require a physical ability (such as driving) that you don’t have that the employer wants.

Information on starting a business: This section was appreciated, but could have been more extensive. This practical advice could have been far more helpful than advise to “penetrate networks” and go on “informational interviews”.

Words on your mission in life: I’m a Christian, so I appreciate an attempt to integrate work and faith, but this section left me puzzled. It was more about how each human’s reason for existing is to love others, not about how to find your own calling. Bolles seems to suggest that if you’re not following God in the small details of everyday life, you’ll never know what your vocation should be.

What to do if you lack experience in your chosen field: This is the most frustrating omission that could be made for both career-changers and millennials alike. If you’ve seen entry level jobs that require knowledge of a specific software and three years of experience, you understand how frustrating this can be. Bolles acknowledges how many people are now competing for a single job (Is it 100?) But other than suggesting networking, Bolles doesn’t address how to overcome a lack of experience, nor does he seem to understand how the economy is changing for the worse for job-seekers. He seems to believe that people are working part-time because they want to (not because the economy is creating part-time jobs), and he doesn’t address the fact that many college grads are working in jobs that do not require a degree. For the most part, 2016’s version of What Color is Your Parachute is significantly out of touch with reality. If you don’t need to work and you have lots of experience, this book might benefit you, but otherwise, this book is not practical.

FTC  Disclosure: I received a free copy of this book from the publisher in exchange for my review.